We need your support

Published: 04 April 2016 19:14Category: Contribute0 commentsPublished by: Alexander Anichtchenko
This project is the result of our personal initiative, effort, and funding. Presently we do not have any external funding support and if we are unable to raise enough funds through your donations, it will be necessary to limit some functions of the website. Maintenance, updates and development will also see significant negative impacts. It is our desire to provide a beautiful, functional and useful tool for all students of Carabidae. Your generosity can help us realize this goal and keep this resource available to everyone into the future.
Read more 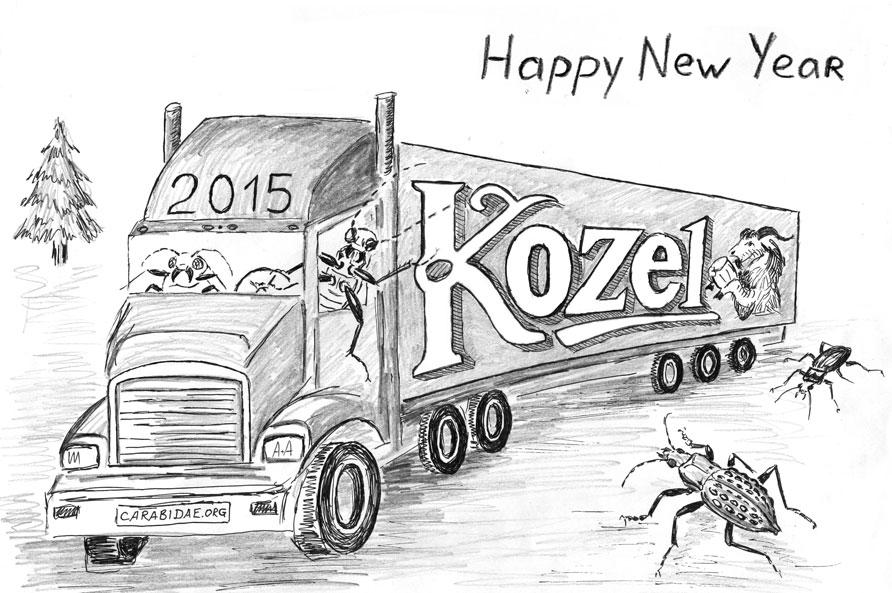 For participants and visitors

Published: 04 April 2014 21:26Category: Contribute2 commentsPublished by: Anichtchenko
All you have good photos of interesting species.
Why do not you send them and help the common cause?
Read more

Merry Christmas and Happy New Year of the Horse! 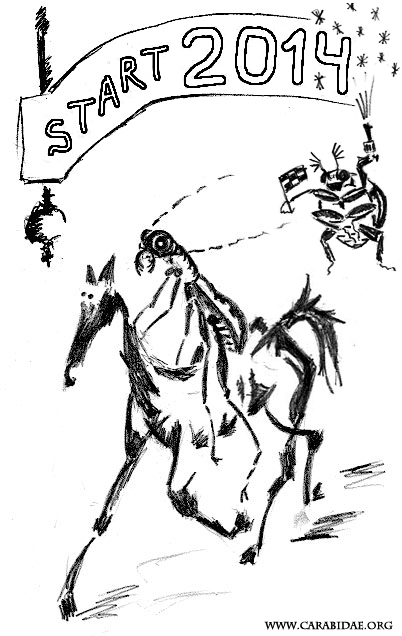 Published: 09 September 2013 20:18Category: Contribute0 commentsPublished by: Anichtchenko
More than 6000 visitors per month
Thanks for your help and cooperation! 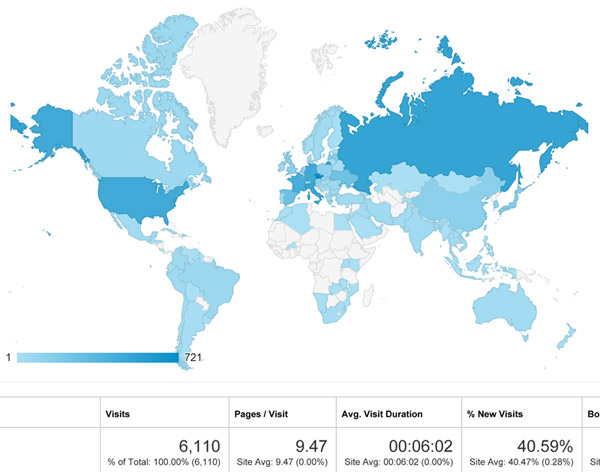 I’m looking to strengthen our team with a new editors.

This role demands scientists and the real fans of the beetles to develop this project yet further.
Administrators may change any content in database and make decisions about the future development of the Carabidae of the World project (Administrator's log-in required).
Please volunteer.

Scientific content is authored by professional scientists (Administrator's log-in required)
Scientific contributors may add and change any content in database of the Carabidae of the World project.
If you are interested in authoring , please contact with Editor.

Media Contributors provide images, PDF's, etc. that can be viewed by Carabidae of the World visitors.
Professional scientists, students and anybody else with an interest in creating media files about carabids can become a Carabidae of the World media contributor. If you are interested in contributing, please contact with Editor or any Administrator.

Scientific and Media contributors keep the copyright for materials submitted to the Carabidae of the World project. By default, contributions are released under the Creative Commons Attribution-NonCommercial License. Contributors who prefer another license can specify alternative default licenses for their text and media contributions.

Attention Administrators:
for security purposes your passwords have been changed. Please contact me to confirm your administrator status and new passwords.

The taxon was described as a form of the Carabus (Morphocarabus) scheidleri excellens var. frivaldskyi (with 4 primary intervals) from Galicia (NW Podolia), = W Ukraine. At present this taxon is rightly considered a synonym of exellens (Brezina B., 2008. Carabus checklist).
The form I found in nominative population of the species near Zolocziv at 2008 (W Ukraine) and in SE Ukraine: Andreevka, Dnipropetrovsk region. There are founds in next regional populations probable, including Moldova.
http://carabidae.pro/carabidae/exce...icius-1798.html

Published: 09 September 2011 21:54Category: Contribute0 commentsPublished by: Panin
For the long time С. (Morphocarabus) zawadzkii dissimilis, now synonym of zawadzkii (Lorenz, 2005), was wrongly considered as C. scheidleri pseudopreyssleri Breuning, 1932, = scheidleri helleri, or in the better case as C. zawadzkii ronayi Csiki, 1906 (Puchkov, A.V., 2008. A Review of the Ground Beetles of the Genus Carabus (Coleoptera, Carabidae) of Ukraine. Vestnik Zoologii 42 (3); Різун В.Б., 2003. Туруни Українських Карпат. – Львів.). As I remark, the true ronayi has not any relationship to zawadzkii (http://carabidae.pro/carabidae/scheidleri-ronayi-csiki-1906.html).
Jiri Niedl (1956) in his famous work "Monografie ceskoslovenskych druhu tribu Carabini. Cast. I." doubts about validity of subspecies status zawadzkii dissimilis, and cited C. scheidleri pseudopreyssleri from the locality where I collected С.zawadzkii dissimilis.
The taxon dissimilis is a low-mountain, western population of C. (Morphocarabus) zawadzkii. It is really hardly differs exteriorly from C. (Morphocarabus) scheidleri pseudopreyssleri because of the presence of four primary intervals of elytra, the main external differential character of C. (Morphocarabus) zawadzkii , are almos absent here. This character have only a few very large females. All intervals of elytra of dissimilis are uniform and well defined, the dots here relatively large and deep. Pronotum is more narrow than in nominative subspecies. The body color is diverse.
It should be noted that not all specimens of C. zawadzkii s.str. have four primary intervals (on 20-30% specimens of population this character are missing). The further we go from the type locality of dissimilis (Uzhgorod), and as the rise in the mountains, the more transition features to nominative form we find. But at altitudes 200-300 m where I collected beetles in this season, there were no one sample (from near 40) similar to nominative subspecies. Other population of C. zawadzkii dissimilis was found by me in the similar habitat on the north side of Carpathians Mountains (Dobromyl district, 2006). However, it is less definite externally – only the marginal forms are differ conspicuously.

Published: 07 July 2011 19:04Category: Contribute0 commentsPublished by: Jean-Pierre Lebel; jp.leb
Abstract
Two new species of Pterostichus Bonelli subgenus Pseudoferonina Ball, are described from the mountains
of central Idaho: Pterostichus bousqueti Bergdahl [type locality = small tributaries of South Fork of Payette
River watershed, ca. 1170 m (3840 ft), 44.0675°/-115.6822°, near Lowman, Salmon River Mountains,
Boise County, Idaho, U.S.A.] and Pterostichus lolo Bergdahl [type locality = Cottonwood/Orogrande
Creek, ca. 870 m (2850 ft), 46.5528°/-115.5522°, North Fork of Clearwater River watershed, Clearwater
Mountains, near Bungalow, Clearwater County, Idaho, U.S.A.]. Males of P. bousqueti and P. lolo are easily
distinguished from each other and the seven previously described Pseudoferonina species by the form of the
median lobe of the aedeagus, and from most individuals of the other species of Pseudoferonina in Idaho by
features of pronotal shape and macrosculpture. Both species appear to be obligate ripicolous hygrophiles,
restricted in distribution primarily to the margins of small montane streams in forested areas. Widespread
intensive stream surveys for Pseudoferonina over many years indicate the geographic ranges of both species
are highly localized, and additional undescribed species may occur in Idaho.
Read more

Published: 06 June 2011 20:23Category: Contribute0 commentsPublished by: Robert Davidson
In current research on Rhadine, I happened upon your species list and noticed several recently described species are missing. I haven't found any other way to reach the administration, so I hope this is the appropriate channel. If anyone is interested in improving or updating the species list of Rhadine, here are the omissions:

I am only occasionally on the internet in this capacity, but if there is a desire for occasional additions or corrections, someone should e-mail me and let me know how to go about it properly.

Welcome to Carabidae of the World

Published: 02 February 2011 16:36Category: Contribute0 commentsPublished by: Anichtchenko
Have you recently described a new carabid taxon? made taxonomic changes? Have quality photos of Carabidae to share?
Contact us and contribute to the world`s largest free Carabidae database!
Read more

Help us fill the gaps

Published: 11 November 2010 14:57Category: Contribute1 commentPublished by: Anichtchenko
Carabidae of the World welcomes inquiries from publishers interested in adding content to our free access Library. We are extremely grateful to those journals that have given us permission to use PDFs and images in the Carabidae of the World project.
This site was visited about 400,000 times by thousands of visitors. We hope you found our work helpful.
Have you recently described a new carabid taxon? made taxonomic changes? Have quality photos of Carabidae to share?
Contact us and contribute to the world`s largest free Carabidae database!
Read more